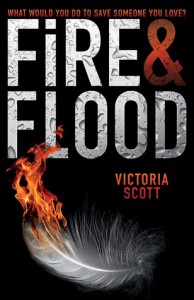 Fire & Flood is nothing like Victoria Scott's Dante Walker novels. It's more like a cross between The Hunger Games and The Amazing Race with a little bit of Pokemon thrown in. It's good - there's excitement, adrenaline, and a little bit of unexpected shock value, but even with all that, I'm having a hard time rating this novel, and here's why:

1.) The main character Tella. She really, really, really got on my nerves. Her good intentions were admirable, but any moment that I felt like "Hey, this girl is finally growing up...," she ruins it with her ridiculous obsession with fashion, makeup, and massages. You're in the jungle/desert fighting for your life. People around you are dying. Your brother - who is also dying - is counting on you. Who gives a flying crap about Nordstrom and Chanel makeup? Tella takes away from the seriousness of the situation by basically being a complete vain idiot.

2.) World-building - or lack thereof. There's nothing. Nothing. We are thrown into this story and BAM, there's a race, a love interest, a bad guy, and a screwed up authority. What time are we in? Why is the Brimstone Bleed still going on?

3.) Character-development - or lack thereof. I could not relate to Tella. She was too all over the place, so you could never really figure out who she was. Was she a survivor? A dependent? A girly girl who only cares about makeup and what clothes she's wearing? I couldn't tell - and as soon as I thought she might be evolving, she'd regress back to being a spoiled little city girl. The other characters were pretty bland and cliche. Guy was the strong, silent type - except, instead of opening up sometimes, he pretty much says nothing at all until the end. Titus was the typical bad guy - except he was all bad. A good bad guy (if that makes sense) should have some kind of quality or past that you can empathize with. This guy was just totally evil, and it didn't make sense given the situation. Everyone is there to save someone they love, but this guy didn't seem like he could love anyone, much less want to save them.

4.) Writing style. I love Victoria Scott - I really do. But I felt like the writing style in Fire & Flood was immature compared to the gravity of the content. It clashed, and as a result, I couldn't take any of it seriously.

On the other hand, there were some pretty awesome, adrenaline-inducing scenes. Twists and unexpected moments. My numbered list above would be enough to add a book to my DNF list, but I couldn't stop turning the pages, and that counts for something. The story is there. It's exciting and has the potential to be an emotional roller coaster.

Which is why I'll read the second novel. I'm really, really hoping that things shape up, and Tella grows the "F" up.

I'll give Fire & Flood a hesitant three stars. It has it's issues, but like I said, I still didn't want to put it down.

Odd combination of feelings about this book, but there you have it....