Grace Lynn Stevenson is an eighteen year old girl who recently moved with her wealthy, but busy parents to a new city. She's popular, pretty and rich - what more could a girl want? But deep down, she's sad, lonely and plagued by nightmares.
When she meets Sebastian Caldwood at her new private school, she's inexplicably drawn to him and his strange tattoos. Sebastian always gets what he wants - he simply has to wish it; but he's fighting his own inner demons, and struggling to remember a past that eludes him. When he remembers that he is much older than he looks, he realizes that he's seen many people live and die, including Grace.
Once Sebastian realizes his true nature and finds what he has been searching for the past hundreds of years, he also realizes that it is now up to him to protect Grace from the dangers that have plagued them throughout eternity.

Amber Frost really took my breathe away. Upon turning the first few pages, I wasn't sure what to expect. By the time I got to the end, I stopped trying to see where the story was leading me and just accepted the fact that Suzi Davis is full of surprises.

I will admit, I was beyond annoyed with Grace in the beginning. She's this pretty little rich girl, and she thinks this life of privilege means that she has to sacrifice her own happiness, wants, and desires. She allowed people to walk all over her and the constant worries she had about what other people thought grated my nerves. She almost had me wishing she was a spoiled brat instead. Thank goodness for Sebastian. After meeting him, Grace grows into herself, realizing that life doesn't always have to be filled with fake smiles and perfection. She can speak her mind, and she finds that she has a lot more to say than she ever thought she had the courage to. I went from wanting to slap Grace out of her stupor to admiring her and the strength and love she carries not only for Sebastian, but for the life she never thought she could have.

Ahhh, Sebastian. My kind of guy. Dark. Mysterious. Tattooed. Mm. Mm. MM. He's definitely strange and absolutely cryptic sometimes, but the guy's lived a long life, one he can barely remember, and Grace inadvertently turns his world upside down, a favor he returns with much reluctance but without much choice, thanks to his heart. He's strong, beautiful, genuine, and it's difficult not to fall in love with him along with Grace. He makes some major mistakes ~ living a long time doesn't make you perfect ~ but he always has the best intentions, and you can't help but forgive him even as you're angry.

The relationship between Sebastian and Grace is intense. It has it's incredibly highs and it's heartbreaking lows, but there's no denying the way they feel about each other. Grace's gushing could be a little much at times, but Sebastian is her first and only love, so I'll cut her some slack. I really enjoyed the fact that the author didn't even bring up the idea of instalove. She allows the characters' relationship to develop and build one block at a time, and when realization struck both of them, I could believe they'd fallen head over heels.

Suzi Davis has a beautiful writing style. The world she builds around Grace and Sebastian reaches beyond the small universe either character believed to exist. Toward the end, everything expands, growing beyond anything the reader could expect. The twist is huge, the villain is unexpected (both in his appearance and identity), and the revelations discovered definitely had my mouth gaping open in shock. Fabulous first novel in this series: it develops the relationships, builds the obstacles, and raises just enough questions to leave us begging for more. 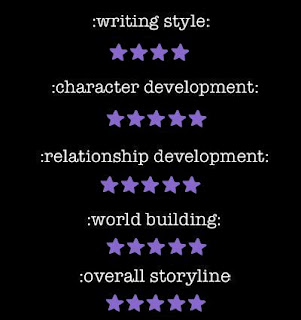